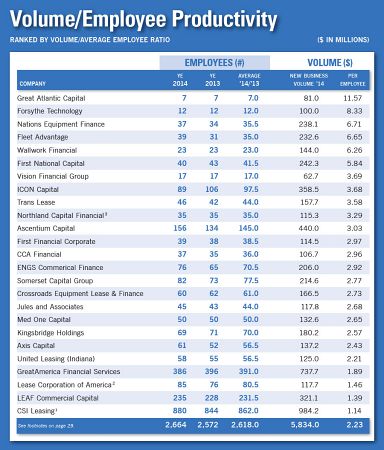 After passing the $5 billion milestone last year, the Monitor Top Private Independents continued their trajectory of growth with $5.83 billion in 2014 new business volume.  With a forecast pf 16.6% growth in 2015, these entrepreneurs are on the fast track toward the $7 billion mark, which is now on the horizon.

“We saw a more competitive marketplace in our space with new entrants and pricing pressures.  Best-in-Class service and on-line finance offerings continue to be the difference makers in this space.”

The Monitor Top Private Independents scored big in 2014 with new business volume of $5.83 billion, up 15.6% from $5.05 billion a year earlier.  Increases were broadly based as 88% or 22 of the participants reported increases versus three or 12% that registered net deadlines.

The top five volume producers in the aggregate reported $2.84 billion of originations in 2014 – as a group these companies represented about a 49% share of the total for the top 25 Independents. However, when viewed from the perspective of having a meaningful impact on this year’s outcome, the top five only accounted for 30.9% or $243.5 million of the overall net increase of $787.1 million. So in effect, we have a much more broadly-based foundation upon which to judge the current and future viability of this group of market participants.

Ascentium Capital jumped two slots to land in the #3 spot on the strength of a 60% year-over-year increase in activity.Ascentium noted that increased customer demand for equipment and brand recognition provided the impetus to close the year with $440.0 million in new business volume, up from $275.4 million a year earlier. The vendor/dealer channel accounted for about 80% of the company’s 2014 volume with the balance—or 20%—emanating from broker/indirect (13%) and direct (7%) sources.

ICON Capital’s $358.5 million in 2014 volume was 19% lower than the prior year resulting in a drop of one slot to the #4 rank. New to the Top Private Independents rankings and rounding out the top five is #5-ranked LEAF Commercial Capital. In 2014,LEAF delivered $321.1 million in funded originations, a tad less than the previous year. It should be noted that LEAF was eligible for inclusion in last year’s rankings, having been the subject of a change in ownership structure the prior year.

This year’s top five percentage gainers as a group accounted for about 58% of the overall net increase in originations reported by all of this year’s participants. The top percentage gainer, by far, was Fleet Advantage with an increase of 184.7% on the strength of a robust comeback in the Class 8 truck market in 2014. The folks at Fleet Advantage noted the “economic advantages offered by new technology, improving fuel efficiency and data analytics are driving significant growth.”

With year-over-year growth of almost 60%, Ascentium Capital’s increase of $164.6 million was the largest absolute dollar increase posted by any of this year’s Top Private Independents. Ascentium’s record new business volume of $440.0 million in 2014 was up from $275.4 million the previous year.

Others that reported an overall increase of 50% or better included: Lease Corporation of America (57.8%), First Financial Corporate (53.3%) and Crossroads Equipment Lease & Finance (50.1%).

New to the Top Private Independents rankings this year were LEAF Commercial Capital, Fleet Advantage, ENGS Commercial Finance and Med One Capital. As noted earlier, Philadelphia-based LEAF Commercial Capital has been a perennial member of the Monitor 100 as a NEC-classified commercial finance subsidiary of Resource America. In 2011, LEAF was “deconsolidated” by its parent (which retained a 15.7% interest) and became a joint venture that includes private investment firm Eos Partners andGuggenheim Securities. As a result of the foregoing, LEAF became eligible for inclusion in this report a year earlier than theMonitor acknowledged.

Fleet Advantage and Med One Capital each took a one-year hiatus and decided to return for this year’s report. The former, ranked #8 on the strength of a vibrant year in the trucking space, posted 2014 volume that was almost three-times higher than the previous year. The latter, ranked #16 with $132.6 million in volume, was up 29% from $103 million in 2013.

ENGS Commercial Finance joins the Top Private Independents for the first time and earned the #10 spot on the wings of a $206 million year, up 42.6%, or $144.5 million higher than a year earlier. Noteworthy was the recent announcement that NY-based private equity firm Aquiline Capital Partners decided to become a majority investor in ECF. Aquiline CEO Jeff Greenberg said, “With the growing demand for truck equipment financing, ECF is well positioned to continue to serve the growth in this specialized market.”

Each year we ask our participants to share their views and insights into the challenges and opportunities of this past year. The following note-worthy comments are representative of the environment that existed for many during 2014.

Much like one year ago, many of the Top Private Independents commented on the breadth and depth of competition present in the industry. Several noted that finding qualified staff members was also becoming increasingly difficult. One said, “As the economy has improved, competition has continued to increase with more lenders and banks entering [back] into the transportation industry. This has included competition and demand for skilled talent.” Another noted, “We saw a more competitive marketplace in our space with new entrants and pricing pressures. Also finding qualified applicants to fill job openings has been a challenge.”

The need to attract and retain high quality people is evidenced by the following insights provided by several who commented on this particular subject in their feedback. A Top 10 respondent noted that the company’s focus for 2015 would be “hiring effective salespeople to help grow our business.” Another elaborated on this challenge by saying, “Our biggest need is to find the right people and retain those with us. There is a great deal of competition for quality people. An inability to find and retain the right caliber individuals will affect our business both short and long term.”

Indicative of what lies ahead was the positive nature of the forecasts that were provided by all of this year’s Top Private Independents. With the exception of two participants that did not respond to this question, the remaining 23 or 92% all said they anticipate volume growth in the current year. Anticipated volume growth forecast ranged from a low of 4% all the way up to a high of 42%.

On an average-weighted basis, the outcome for an overall increase of 16.6% growth would translate into about $968 million of new business volume in 2015. As an aside, last year’s forecast called for an increase of 14.9% or $755 million, which was exceeded by a tad more than $32 million. Assuming some semblance of a repeat performance in 2015, we have the real possibility that next year’s Top Private Independents will surpass the $7 billion threshold.

Given the competitive nature of the environment, we can’t help but be impressed by the overall performance of this year’s Top Private Independents. In some ways, perhaps disadvantaged, the large majority of this year’s participants held their own against formidable competition, i.e., the banks that are hustling to build earning assets.

Evidence of this trend continuing is shown by the overall forecast for 2015, which if realized will bring this group of entrepreneurs to a new level of achievement. We can only watch and listen from the sidelines as the reality of 2015 unfolds and we get to revisit the outcome in next year’s salute to the Top Private Independents.

We extend a sincere note of thanks for all those who once again participated in this annual event. To those who are new to the rankings we welcome your interest. And we’d be remiss if we didn’t recognize the loss of Direct Capital , last year’s #4-ranked independent, who was acquired by CIT Group in late 2014.