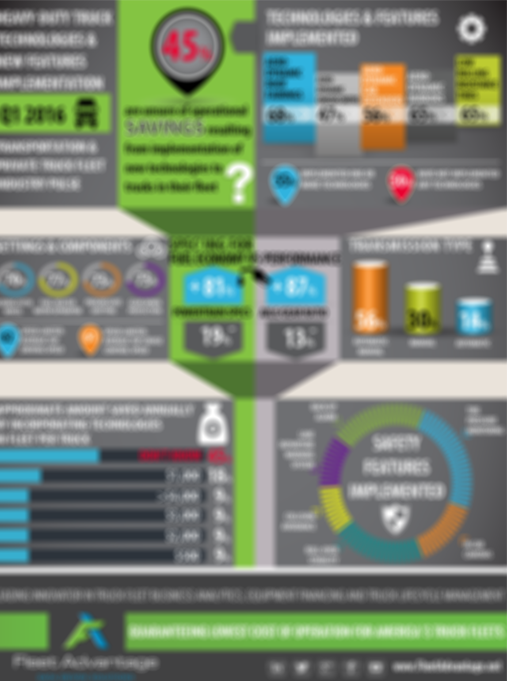 The online survey, presented to more than 500 private and transportation fleet executives and managers shows that 45% of respondents are unsure of operational savings resulting from the implementation of new technologies to heavy-duty trucks in their fleet. “Big Data” has played a significant role in the industry, but clearly many organizations are unsuccessful in trying to assimilate and quantify operational savings from the information.

“Ever since the recession ended, the industry has gone full-speed ahead in adopting newer technologies to their trucks that in turn provide access to a wealth of data and intelligence, especially as it relates to fuel economy,” said Mike Spence, Senior Vice President of Fleet Services at Fleet Advantage. “Unfortunately, this survey validates that data has become increasingly voluminous, and many industry professionals do not have the tools to analyze and digest this data that can then be used to make critical decisions for their fleet operations.”

Despite the current low cost of diesel, 81% said they spec their powertrain for fuel economy instead of performance, and 86% spec their axle/gear ratio for fuel economy as well. “This is a positive sign as fleet executives realize that they cannot just count on diesel prices staying low for continued improvement in fuel economy and savings,” Spence adds. “Today’s cutting-edge technology is designed to save more fuel than ever, but fleet executives must be able to track their fuel performance and quantify the data in order to realize the cost savings.”

The full results from the survey can be found here.

Fleet Advantage serves America’s top truck fleets and guarantees the absolute lowest cost of ownership by providing truck leasing and matching proprietary data driven IT processes with fleet analytics using the latest eco-efficient clean diesel technology to achieve optimum vehicle productivity, while reducing fuel and maintenance costs. Fleet Advantage is ranked as one of the fastest-growing privately held companies in the state of Florida and the fastest growing independent truck lessor in the U.S.  In 2015 and 2013, Fleet Advantage was also named to Inc. magazines’ 500|5000 list of fastest growing companies in the nation.  In 2011, CEO John Flynn was awarded the Florida Ernst & Young Entrepreneur of the Year® award in the “Emerging” category.