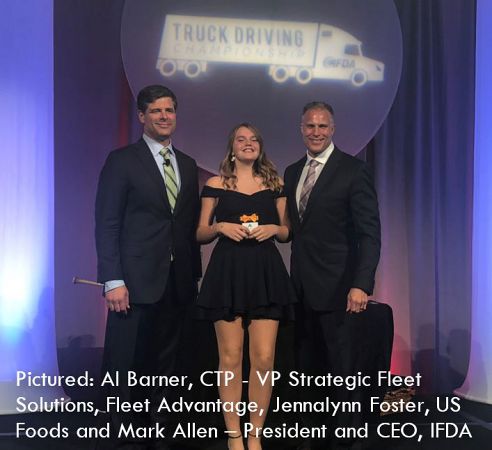 LAKE BUENA VISTA, FL (October 09, 2018) – For many truck drivers today, it’s easy to think of the daily grind and stay focused on the task at hand. However, they need to realize that they are heroes, particularly to their families.

That’s the reaction many children had during the children’s essay contest at the 33rd annual IFDA Truck Driving Championship. Sponsored by Fleet Advantage for the fourth straight year, the essay contest celebrates the dedicated men and women who comprise today’s foodservice distributor truck drivers.

Jennalynn Foster, age 13, daughter of Carolynn Russell, driver for US Foods, won first place in the 11-13 year category and says; “her mom is a hero because she never lets anything stop her”. She adds that her mom reminds her of the Disney Character Mulan “because she is one of very few women in truck driving….Everybody who doesn’t expect her to do as good as a man is proven wrong.”

“Like every industry, it’s all too easy for truck drivers to remain focused on everything from deadlines to brake lines, but when we stop to appreciate all the sacrifices of them and their families, it’s quite remarkable,” said Brian Holland, President and CFO of Fleet Advantage. “These are professionals who have no choice but to give their 100% effort each day, or else America doesn’t get the food, water and clothes we need to survive. We certainly thank them, and we’re proud to give their children and families an opportunity to thank them through this essay contest.”

The IFDA Truck Driving Championship, organized by the International Foodservice Distributors Association, held at the Walt Disney World property in Orlando, is a three-day program that begins with a written exam followed by a pre-trip inspection and field obstacle course.

Fleet Advantage has been a sponsor of this fun-filled family event for four straight years and helped organize the Kids Essay Contest. Children of truck drivers are proud to know their parents help keep America moving. The kids were given three essay questions to share why they are proud of their truck-driving parent, including what Disney character reminds them of their dad and why.

According to IFDA, the foodservice distribution industry employs 131,000 truck drivers in the United States. As a vital part of the supply chain, drivers in the industry earn an average annual wage of more than $63,000, well above the average for a U.S. worker.

Fleet Advantage serves America’s top truck fleets and guarantees the absolute lowest cost of operation by providing truck leasing and matching proprietary data driven IT processes with fleet analytics using the latest eco-efficient clean diesel technology to achieve optimum vehicle productivity, while reducing operating costs. Fleet Advantage is ranked as one of the fastest-growing privately held companies in the state of Florida and the fastest growing independent truck lessor in the U.S.  In 2018, Fleet Advantage was ranked the 9th Top Private Independent from Monitor Daily; and in 2015 and 2013, the company was named to Inc. magazines’ 500|5000 list of fastest growing companies in the nation.  In 2011, CEO John Flynn received the Ernst & Young Entrepreneur of the Year® 2011 Florida - Emerging Category award.